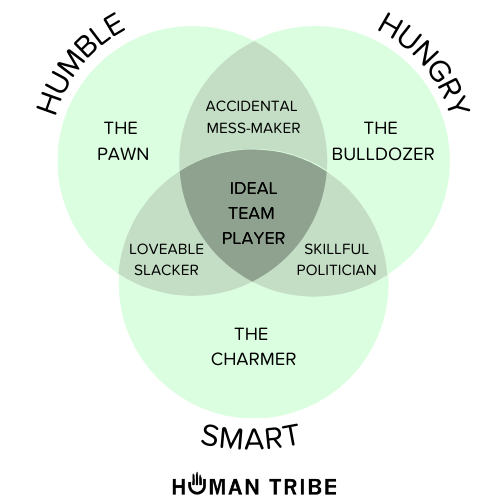 I recently posted about the Ideal Team Player, a model by Partick Lencioni that measures three virtues of what he says it takes to be an ideal team player; Humble, Hungry, Smart.

No one is perfect. We all have bad days or bad times in our life when we don’t show up at our best, but through self-development and making the active choice to be the best we can be, we can edge closer and closer to showing up more often than not as an Ideal Team Player.

For those of you following my posts on The Five Behaviours of a Cohesive Team, this model speaks directly to that one. When we can show up Humble, Hungry and Smart, we can enable teamwork by making it easier to achieve the behaviours. Being an Ideal Team Player makes it easier to do things like build trust by being vulnerable, engaging in productive conflict and holding other team members accountable. If every member of a team possessed all three virtues, imagine how functional and cohesive they would show up as a team.

I had a lot of replies to my previous post with something along the lines of: “I’d love to say that I am an Ideal Team Player, but…”

Let me first say thank you. Thank you for your honesty, your bravery and your self-reflection.

With the number of replies it also made me realise that I hadn’t broken down the intersections of each enough, so, let’s do it now,

The Accidental Mess-Maker (Humble + Hungry)
These people genuinely want to serve the team and are not in it for the credit, but their lack of awareness around how their words and actions impact others leads to interpersonal problems. While their work ethic and sincerity will earn them some respect, their team inevitably gets tired of having to clean up the emotional mess they leave in their wake.

The Loveable Slacker(Humble + Smart)
These people care about others and aren’t looking for attention or credit, but unfortunately, their lack of hunger means that they rarely go above and beyond. They do as much as they are asked and usually no more. Because they are usually charming and caring, it is hard for leaders to address the issues with the lack of drive in these people. The Loveable Slacker needs significant and ongoing motivation and can often weigh down the performance of a team (more so than an Accidental Mess-Maker)

The Skillful Politician (Hungry + Smart)
These can be the most dangerous of the three to have on your team. “Cleverly ambitious” and willing to work extremely hard, they only act in ways that will benefit themselves. To make them even more dangerous, because they are Smart, they are good at pretending to be Humble when in reality their actions are only self-serving. Unfortunately, by the time a leader sees what is really going on, the Skillful Politician has often already created a trail of destruction, stepping over anyone who gets in their way (especially their Humble colleagues).

Now, I know that as you are reading through this, you’re going through your mental rolodex of people you work with and placing them into each category. I’m not going to say don’t because I know you won’t listen, but I will say be careful. Labelling people, even in private can be harmful. Especially if it’s a hastily made judgement, and double especially if you then begin to treat them differently based on the judgement.

Lencioni also offers caution to mislabelling an Ideal Team Player incorrectly because they are stronger in one of the three areas. As an example, he says don’t refer to an Ideal Team Player who is slightly less humble than hungry and smart as a Loveable Slacker. “These classifications are only reserved for people who are significantly lacking in one or more area.”

Ok, that was a lot. Nice work making it this far.

If you are still unsure of exactly where you sit on the diagram, comment below and I can send you a simple, non-confrontational (free) self-assessment. If a self-assessment seems a bit overwhelming at this stage, that’s ok too. As a starting place, why don’t you just look at the three virtues and rank yourself. Start with the one that you feel you demonstrate most clearly and easily, followed by the second and third. And there you have it, a starting point for development.

In my next post I am going to discuss how you can apply the model to develop in one or more of the virtues.

PS – now that I have expanded further on these, post below and let me know where you think you sit and why.